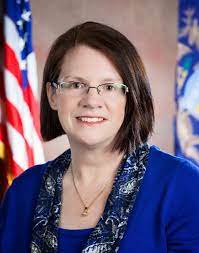 Said absentee voters can vote in Livonia “without reason”

Praised by liberal newspaper for her efforts during the 2020 election

“Barton, Lyons and Nash, all Republicans, worked heroically to assure fair elections in the face of the unprecedented logistical obstacles posed by the pandemic, then resolutely defended clerks and election workers in both parties from slanderous attacks on their integrity and procedures. Testifying before skeptical lawmakers and canvassers from their own party, they calmly discredited false rumors and provided authoritative reassurance that no election-altering fraud had occurred.”

Said she would always be faithful to the Constitution

In the past few days I have been approached to allow access to election material.

I am all for transparency, I believe in audits, I want all citizens to feel confident in their vote

Watching the news right now.  I am sickened

I took an oath to support

The constitution of the United States

The constitution of the State of Michigan

The charter of the City of Livonia

I will always stay faithful to the oath!

Says she “takes her oath of office very seriously.”

“I know you and your team at City Hall do a great job for the citizens of Livonia. I think the real problem of why this controversy happened falls on the local Republican Party. They select their members to the board of canvassers.

I know back when I was involved, we would select attorneys to this position. People who we trusted to make the right decisions and look at the facts. But the “crazies” as I call them have taken over the local party system.

I would bet the two who are on the board now are not lawyers. They are likely just partisan Republicans that did not have the proper background (just a guess on my part) to have this role.

Having said that…it is concerning to hear that such a large number of the absentee ballot boards in Detroit can’t balance their numbers. I heard 70%. While they are only off by 1-4 votes each…that is still concerning. I don’t know if they need additional training or new equipment, but something should be done to fix that problem before 2022.

But clearly there is NO election fraud and no reason the board should have initially split their vote 2-2.”

“So very proud to have you as a friend Susie! Thank you to you and your team for your dedication to the voters of Livonia and for supporting the validity of the vote in Detroit. My son’s vote is a Detroit vote as are many of his friends and our friends. Thank you for your integrity! You were a fantasitc interviewee, Im sure they will be asking you back!

Praised by far left Mayor Maureen Brosnan on Livonia Public TV on how her department runs the election process – 3:45

Received a $142,000 grant from the Center for Tech and Civic Life (funded by Zuckerberg).  This or;ganization received $350 million in funding prior to the election.

“I am very pleased to announce that the city of Livonia election division just received a grant from The Center for Tech and Civic Life in the amount of $142,153.96.  I would personally like to thank Deputy City Clerk Lori Miller for getting this whole grant processes started and for the Livonia City Councilmembers for unanimously voting to allow me to accept the grant.

With this grant the elections department is able to pay workers $100 a day for hazard pay.  I greatly appreciate all the workers and I know how challenging this year is for people.

The bottom line, this grant will allow the clerks office to administrator this election in a Safe, Secure and Efficient manner”

This organization is funded by Google, Facebook and the Rockefeller Democracy Fund.

Worked with County Commissioner Terry Marecki to install a ballot drop off box outside City Hall.

Was issued a subpoena by the legislature

Sen. Ed McBroom, has found himself reviled by Trump and his supporters, who have asked the state Republican Party to approve a resolution calling for his resignation.

“He doesn’t deserve this,” said Nash, the Livonia clerk who like McBroom, considers herself a conservative Republican. “They wonder why people don’t want to be public servants any more. You do your job faithfully, and then get criticized for it.”

““The complaints, the threats, the abuse, the magnitude of the pressure — it’s too much,’’ said Susan Nash, a city clerk in Livonia, Mich., who has contended with ongoing questions about the integrity of the process in her community.”

Praised by Livonia Democratic Club for her commitment to a “free and fair 2020 election.: