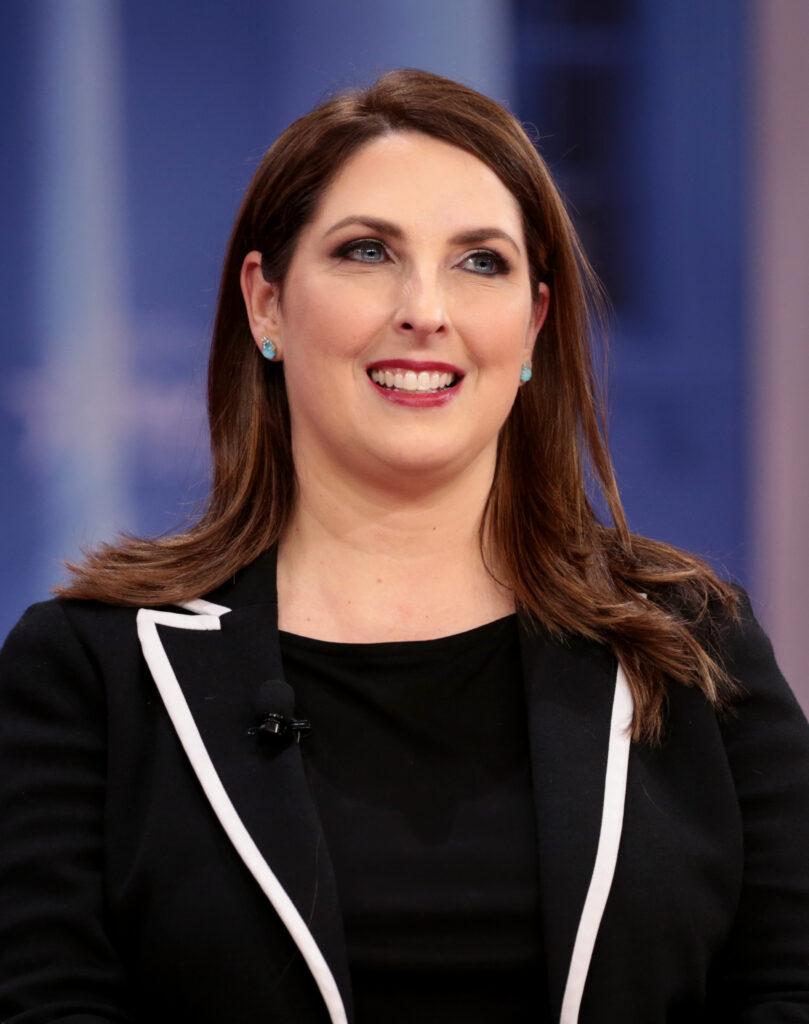 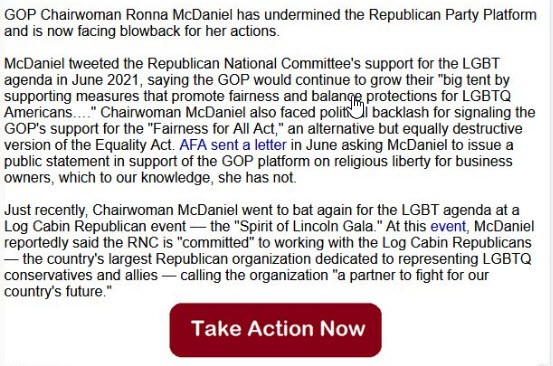 Claimed she had 500 sworn affidavits of 11,000 incidents of voter fraud

Did not show up at the Arizona audit

Survey RNC sent out after the election.  Absent from the list:  a question about the election being stolen.   Also an “Order of Merit” Award with Mike Pence to solicit donations with her in charge.

RNC – absent when Democrats were calling for impeachment of Trump

Here is the campaign website where she endorsed Dave Trott:

“Frightening. That is the only word to describe Mark Bowden’s article. President Trump’s inability or unwillingness to follow normal decision-making protocols has created chaos in our foreign policy and put our country at risk.

The article also helped me with respect to the 2020 election. I had been flummoxed. I will now have to consider voting for a Democrat: High unemployment, a stagnating economy, and massive debt for a few years are better than alienating the rest of our allies, getting into a nuclear war with Iran, or allowing 10,000 Islamist soldiers to be set free in Syria.

Trump is psychologically, morally, intellectually, and emotionally unfit for office. We can only hope Congress impeaches and removes him so we have a choice between two adults in 2020.

Former Republican Member of the House of Representatives

“”Happy #PrideMonth!” she tweeted last week. “@GOP is proud to have doubled our LGBTQ support over the last 4 years, and we will continue to grow our big tent by supporting measures that promote fairness and balance protections for LGBTQ Americans and those with deeply held religious beliefs.”

GOP Platform supports traditional marriage.  “”Traditional marriage and family, based on marriage between one man and one woman, is the foundation for a free society and has for millennia been entrusted with rearing children and instilling cultural values,” it reads. It also endorses the First Amendment Defense Act, which would effectively protect faith-based adoption agencies from mandates to serve same-sex couples.”

“Tony Perkins, president of the Family Research Council, a leading national conservative Christian lobbying organization, condemned McDaniel’s tweet. He said it was “tone-deaf” and “offensive” since it applauded “the woke agenda her base is trying to combat.”

“A handful of days into this rainbow deluge, the air of LGBT pride is so suffocating that people could choke. It’s plastered across social media, corporate logos, cereal boxes, even big box stores’ pandering displays. …,” FRC’s Perkins, one of the nation’s leading evangelical lobbyists, wrote in an op-ed.”

Claims RNC has spent $30 million on election integrity efforts across the country.  Where did the money go?  Also waited until February 21 to form the committee.

“Why would Ronna McDaniel entrust the GOP cybersecurity in the hands of a company that has failed before, that has a head of tech connected to Warren Flood, Joe Biden’s former White House IT Director, and maybe giving backdoor access to Crowdstrike? In other words, WHY would Ronna hire the firm with Brennan’s clandestine asset sitting at the top of data protection. It’s almost as if they want to get hacked or even worse…”

“Ronna’s uncle, Mitt Romney, the former governor of Massachusetts and Republican presidential nominee in 2012, was one of Trump’s fiercest opponents during the election. Ronna not only supported the candidate but also served as a delegate to the Republican National Convention for Trump.”

Rep Sabatini said this about the money RNC raised: “The Republican Party raised $300+ million claiming to fight for election integrity. Guess how much they spent on the #Maricopa Audit? Zero!”

Did Not Want to Say Whether Election Was Stolen

““When I saw some of the things Sidney was saying, without proof, I certainly was concerned it was happening in my building,” McDaniel said. “There are a whole host of issues we had to deal with — what is the liability of the RNC, if these allegations are made and unfounded?”

“The “Audit War Room” account added to that by sharing what Ronna reportedly said at the time about the audits: “Actually, credible sources say @GOPChairwoman said she couldn’t risk helping out. Unbelievable! Of $300 million raised by @GOP for election integrity, NONE has gone to fund the Arizona Audit or any other audit. Thank you to the TRUE PATRIOTS who are funding the AZ audit!”

“The grave question the Constitution tasks senators to answer is whether the president committed an act so extreme and egregious that it rises to the level of a high crime and misdemeanor. Yes, he did,” Romney said on the Senate floor.

Appeared to Have Tensions With Trump During His Re-Election Campaign

“Ronna was often left on the outside looking in—sometimes literally. In June, she had arrived at the White House for a political meeting, but waited in the lobby for more than an hour before she was brought into the Oval. When she walked in, the president asked why she was so late. ‘They don’t want me sitting in the meetings with you,’ Ronna told him.”

McDaniel worked in Michigan for her uncle Mitt’s 2012 campaign for President of the United States.

RNC under her leadership announced partnership with the LGBTQ movement
https://www.foxnews.com/politics/rnc-announces-pride-coalition-partnership-with-log-cabin-republicans-ahead-of-midterms