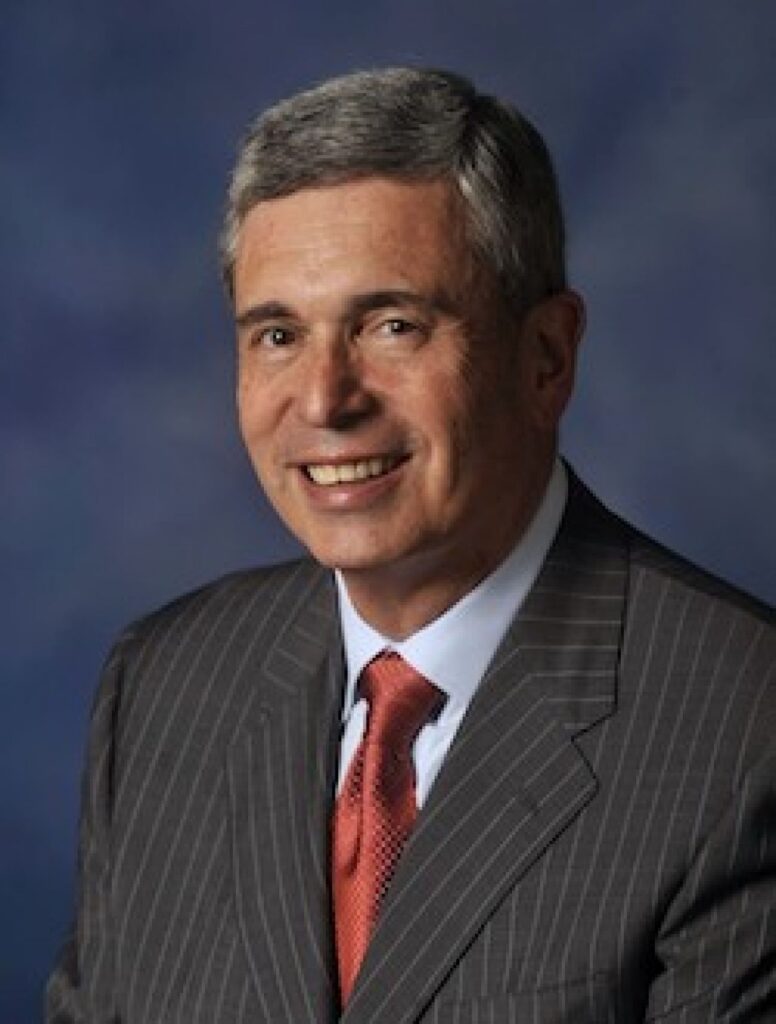 Ron Weiser is that amazingly wealthy silver-spoon billionaire, whose long GOP Michigan career has been  frustrating the real conservatives while backing “moderates” (other RINO’s) in primary races.

He has done an incredible job, running roughshod over the grassroots while holding office.

Weiser buys those who sellout (like Stan Grot) of every kind.

Big Daddy Weiser uses MIGOP donations to recruit and purchase party candidates, to control their agendas and buy election outcomes.  This makes MIGOP the biggest example of Republican party corruption of the 50 states! 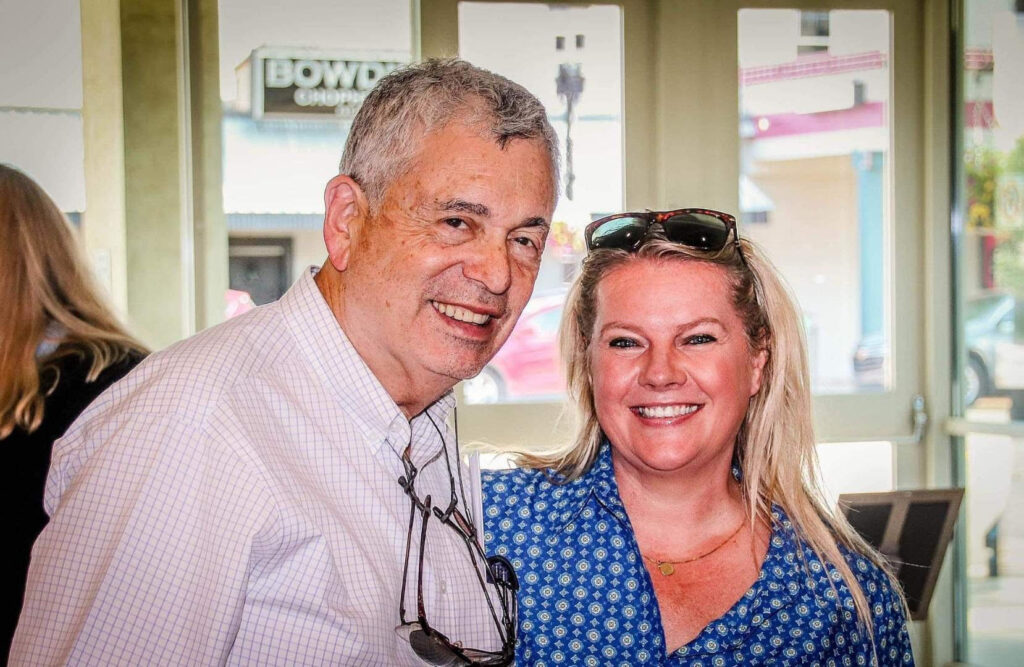 LOOK AT THIS SMOKING GUN MEMO from JULY 2018!

This is the situation wrought in hell, to deal CASH and empowerment by Weiser Big Daddy Slimebucks!!

$230,000 is paid on a slimy hush hush deal for corrupt Stan Grot to step down from his candidacy for SOS. 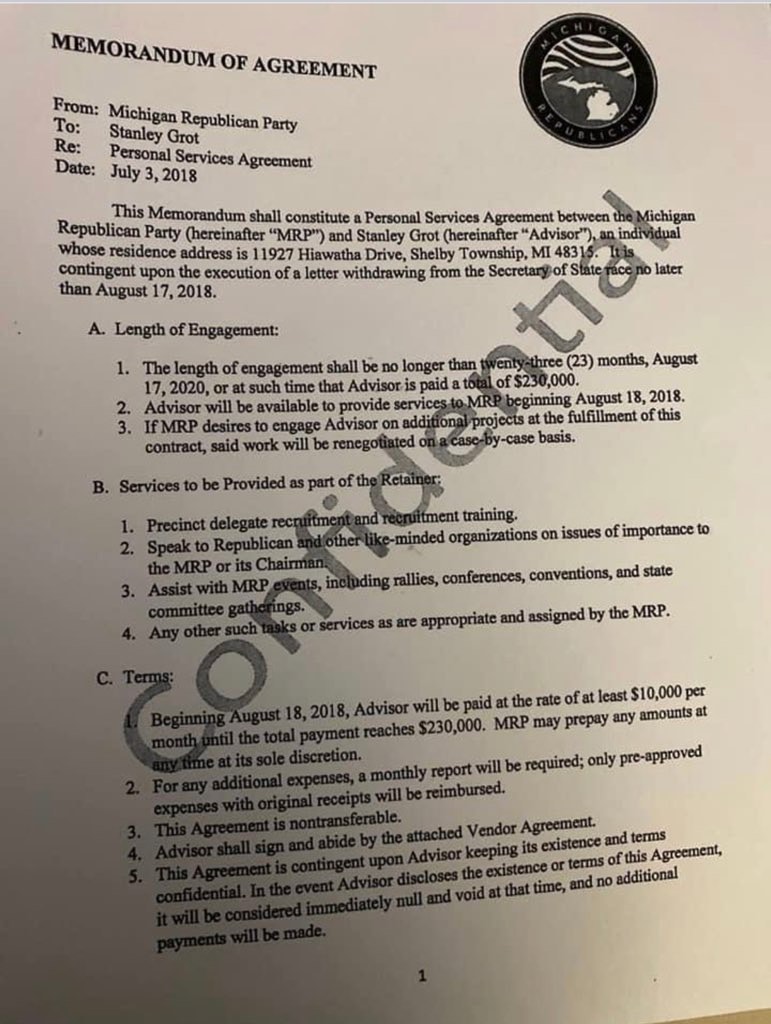 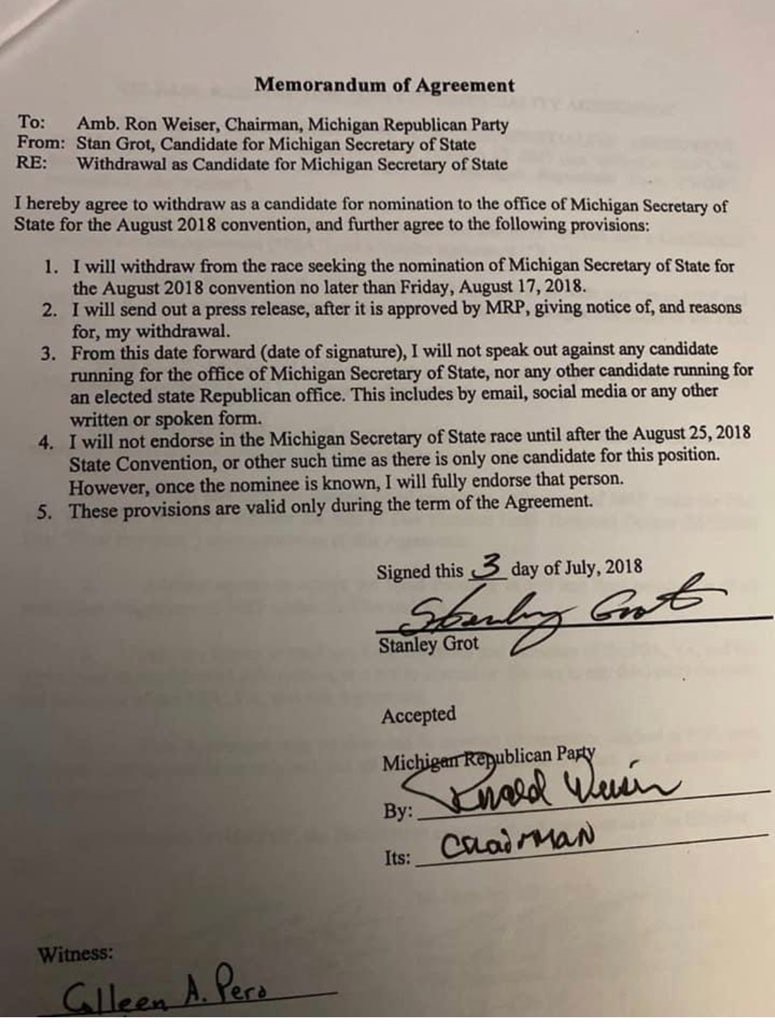 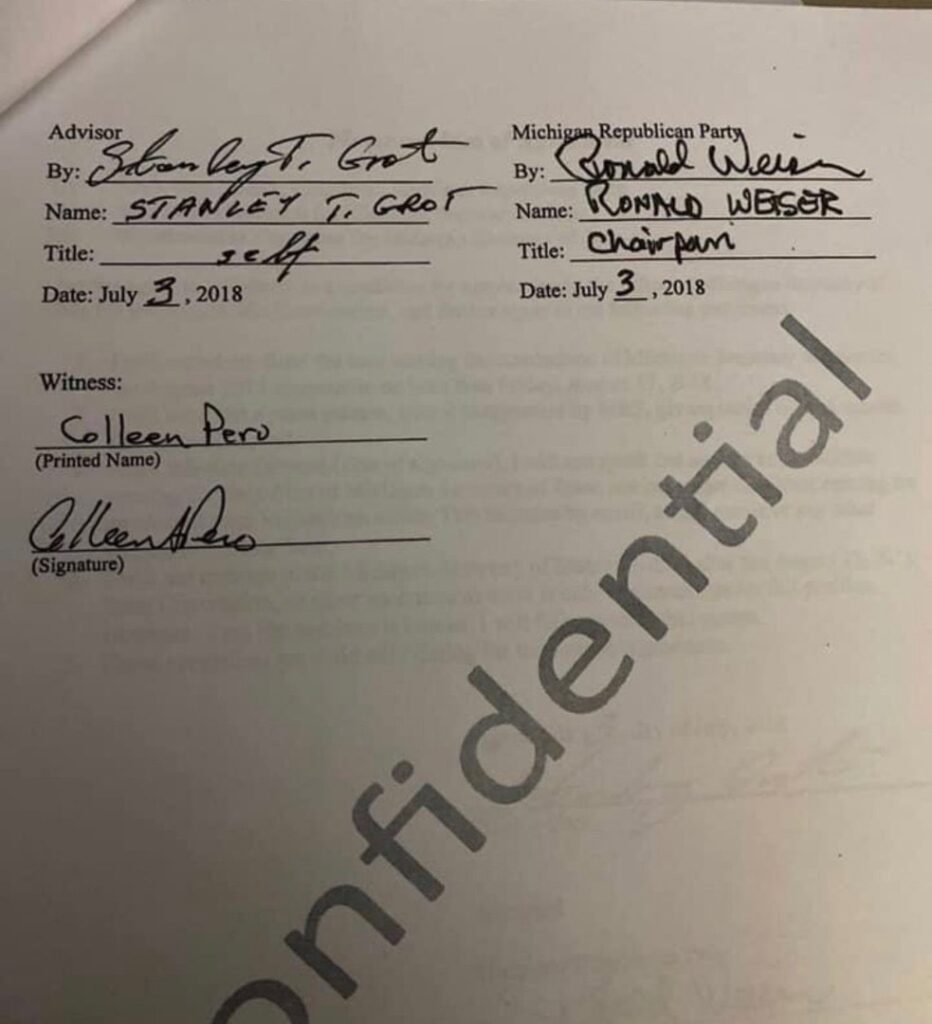 This particular bribe was leaked and Dem State AG Nessel actually investigated and fined Weiser and MIGOP $200K.  Somehow, Weiser has remained in office, while his crooked empire remains in place at MIGOP (extremely valuable to the Democrat agenda). When you take in what this memo proves, you will fully understand what is wrong in the MIGOP.

Detroit Free Press post from 8-17-18 “Shelby Township Clerk Stanley Grot announced Friday that he is withdrawing from the race for Michigan Secretary of State.

“Family obligations, timing, and the overall political atmosphere make it difficult for me to continue with my campaign,” Grot, a Republican, wrote Friday on Facebook. “However, I remain optimistic and positive as we go into the 2018 general election.”Delegates to the Aug. 25 Republican Party state convention are expected to pick their nominee for secretary of state.

Puppet Stan Grot told the media it was for his family that he stepped out of the SoS race. Grot does not disclose all the cash he got, nor the lucrative basis of his cushy consultant post in MIGOP at $10K a month-it’s all in the “confidential” memos.

Grot already is the benefactor of a rare “appointment” Township clerk position since 2012 in Shelby Township, and Grot doesn’t even need to face opposition in an election.  And Grot is still working at MIGOP, per a direct confirmation of Meshawn Maddock, is on MIGOP’s financial committee!  What could go wrong?

And adding insult to injury, Grot is now out twisting arms for the MIGOP, for big Daddy Slimebucks, as a sort of mob family enforcer.  Ask Mark Forton, Macomb County GOP party chairman).  Forton, in response to the massive evidence of fraud in the 2020 November election, is demanding the entire County’s votes be examined in a full forensic audit. Grot has been reported to have applied pressure on Forton to back off on the audit demand. 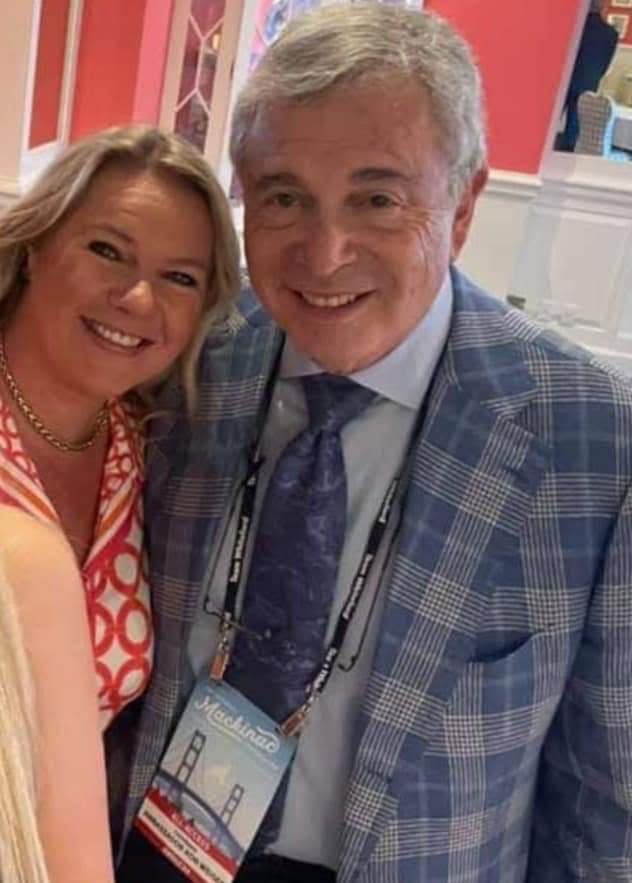 WEISER and all associated with his Slime-bucks deals must be removed from MIGOP!  Big Daddy Slime-bucks has to go.  He must leave MIGOP and take his corrupt illegal act and go!

So…let’s be 100% honest here.  Big Daddy Slime-bucks Ron Weiser is our number one RINO enemy, for his illegal corrupting of the MIGOP and the betrayals he is achieving in thwarting of the vote of the people—As such, his act and all associated with it must face IMMEDIATE RESIGNATION OR EXPULSION FROM POLITICS AND FROM THE REPUBLICAN PARTY.  Weiser is our most wanted RINO!

How to track down:  go to the FEC website, then type in “Ron Weiser.”

McKinley and Associates, the real estate firm he started, has a 1.8/5 rating on Google.

Received a complaint from Laura Cox that he paid Stan Grot to drop out of the Michigan Secretary of State race.  This violates Michigan campaign finance law.

”Jason Did A Tremendous Job Putting Together A Team And Getting Us Ready For 2022,” Weiser Said. “Building On The Legacy Of His Father, Jerry, Jason Served The Michigan Republican Party With Great Dedication And Exceptional Talent. We Wish Him Nothing But The Best And Know He Will Be An Asset To Republicans In Michigan And All Over The Country This Cycle And For Years To Come.”

State Party’s Executive Director said the election was not stolen

His hire, Jason Roe, stated:  “The unfortunate reality within the party today is that Trump retains a hold that is forcing party leaders to continue down the path of executing his fantasy of overturning the outcome—at their own expense,”

“Frankly, continuing to humor him merely excuses his role in this. The election wasn’t stolen, he blew it. Up until the final two weeks, he seemingly did everything possible to lose. Given how close it was, there is no one to blame but Trump.”

“Principled conservatives who respect the rule of law and speak out suddenly find themselves outcasts in a party that is no longer about conservatism but Trumpism.”

How to track down:  Go to FEC.gov, and type in “Ron Weiser.”

“The woman in Michigan” has demonstrated more character than we have ever seen from this president. While I disagree with Gov. Gretchen Whitmer on many issues, I respect her. No governor or governor’s family should ever live in fear that a Twitter tirade from the president could encourage, exacerbate or inflame hostilities against them.

“But this is 2020, so of course this year is different. I cannot vote for the Republican nominee for president. For the good of the party I have supported my entire life, but more importantly, for the sake of the country I love, I implore all patriotic Republicans to join me.”

“While there are a few activists who want to shrink our party and are focused on fighting with other Republicans, my team is focused on growing our party and fighting our true opponents, the Democrats,” Weiser said in a statement. “That is where our focus will remain, and I’d encourage everyone to channel their frustration toward winning in 2022, not attacking each other. The Democrats are the only ones who benefit.” 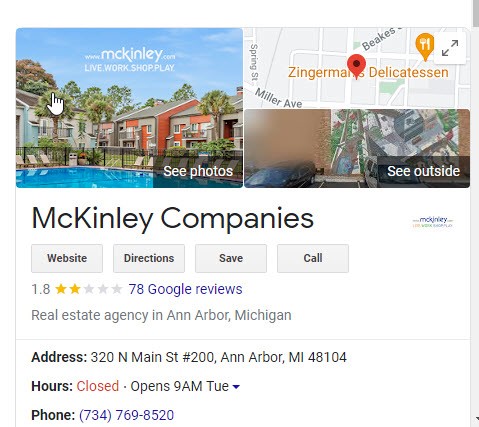 Apartment
building managed by Weiser’s firm, McKinley and Associates, has a 2 out of 5
rating on ApartmentRatings.com

State
party under his leadership invited Nancy Mace, who Donald Trump calls a RINO,
to speak at the 2021 Mackinac Island Conference