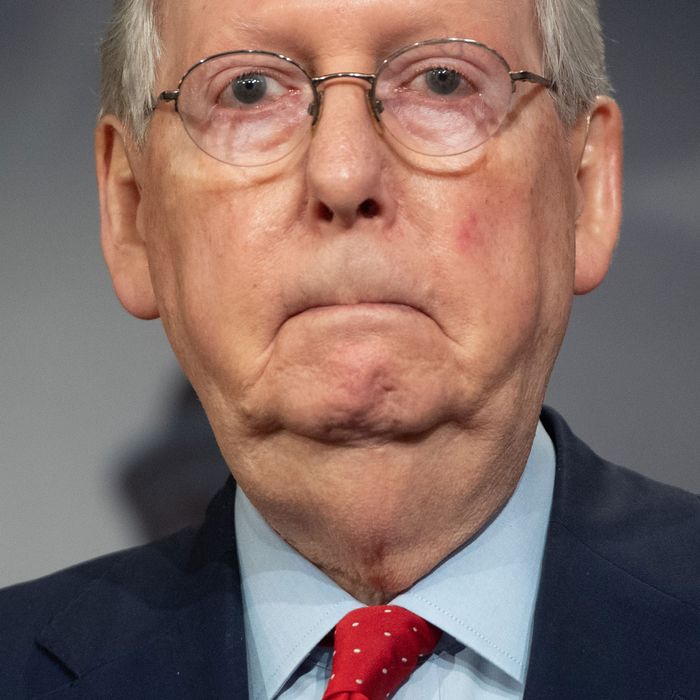 “That guy should resign as the leader. He broke up the bills. And by breaking it up it was, it was bad. But then he gave them two months to get their act together. They were ready to fold. We had ’em. And then Mitch Mcconnell gave ’em two months. This guy doesn’t have a clue.”

“When the Broken Old Crow, Mitch McConnell, agreed to a two-month extension, he allowed the Democrats to get their act together and pass the $1.2 Trillion “Non-Infrastructure” Green New Deal Bill, which is a disaster for America in that only 11% of the money will be spent on REAL Infrastructure, with most being spent on Green New Deal nonsense, with big tax increases.

Its actual cost is over $2 Trillion, but the bigger disaster is yet to come in the next, much larger version of the Green New Deal, which some people say will be $5 Trillion. This was all allowed by Mitch McConnell’s incompetence and now I understand that a couple Republican Senators may get on board so that they can have yet another and even bigger victory, for the Democrats, while at the same time ensuring massive Inflation and the destruction of our Country as we know it.

This is what happens when you allow a guy who lost an Election to take over the Office of the President. He obviously had no mandate, but they’re changing our Country and everything it stands for. Mitch McConnell couldn’t stop the first Bill so 19 Senators, including himself, joined in. That’s what he does—if you can’t beat them, join them. If he wasn’t so stupid and didn’t give the two-month extension, he could have stopped it all.

Now he and his RINO friends will allow a much bigger and far worse Bill to pass, ruining our Country while giving the Democrats a great political lift, all at the same time. People, with the help of the Fake News Media, have already forgotten about the horrendous Afghanistan withdrawal, an economy and jobs that are in shambles, and so many other things. The good news is, they can’t forget about Inflation because it’s hitting them right in the face. This is the Broken Old Crow’s fault.

He could have won it all using the Debt Ceiling—they were ready to fold. Now the Democrats have a big victory and the wind at their back. McConnell is a fool and he damn well better stop their “Dream of Communism Bill” and keep his Senators in line, or he should resign now, something he should have done a long time ago. Use the Debt Ceiling like it should have been used, you Old Broken Crow, to do so would hurt our Country far less than this horrible Bill. Any Republican in the House or Senate who votes for this Bill will never ever get a Trump Endorsement. Thank you, and good luck!”

Voted to raise the debt ceiling

Said he is not in favor of impeachment of Joe Biden

“Well, look, the president is not going to be removed from office. There’s a Democratic House, a narrowly Democratic Senate. That’s not going to happen,” McConnell said at an event in Kentucky, asked if Biden’s handling of the drawdown in Afghanistan merits impeachment and if he would support it.

“There isn’t going to be an impeachment,” he added.

One America News Host Natalie Sharp says McConnell was complicit in the “crime of the century.”

“Natalie Harp:  But you know what?  You failed there, Mitch McConnell, as did every Republican who claims moral supremacy. Because you failed to stop the worst. You failed to stop the very thing that is fundamentally destroying our country. Really, the only thing that matters – Democrats usurping our right to free and fair elections. You know, Democrats like to say, ‘Elections have consequences.” But so do crimes. And the consequences of the crime of the century are what we’re living through now, and what we still have yet to. Record violence, a broken border, inflation, rising gas prices, energy dependence, unemployment, and so much more. So as much as Republicans say they want to stop all this, saying it is futile. Because they could have stopped it in November. But they didn’t. They preferred to stop him and our movement!”

What could be worse than letting Americans’ votes be stolen & an illegitimate government destroy our country?

People like McConnell & Barr are worse than the Democrats, who are at least honest about how crooked they are

Trump spokesperson:  “What kind of a person sells out our votes to China?”

“With leaders like Mitch McConnell, they are helpless to fight. He didn’t fight for the Presidency, and he won’t fight for the Court. If and when this happens (Biden packing the courts), I hope the Justices remember the day they didn’t have the courage to do what they should have done for America.”

Called by a Number of GOP County Leaders to Step Down

Chairman of Nelson County Republican Party (in Kentucky) says McConnell has “complete disdain for the will of his constituents.”

“He laughed about it, according to a source familiar with the matter.

The reaction underscores how McConnell plans to navigate the post-Trump era: Focus squarely on winning back the Senate majority — while ignoring the former President at all costs.

Indeed, amid their fallout following the deadly US Capitol riot at the hands of Trump supporters, McConnell has made the calculation that he’s done with the former President and is moving on, according to sources close to the GOP leader. And after Trump issued a blistering attack on McConnell, riddled with false statements and personal broadsides, the GOP leader has no plans to respond, the sources said.

“You probably are not going to hear him utter the name Donald Trump ever again,” said one source familiar with his thinking. “He’s moving on.”

“Today, the DNC released a new video highlighting Mitch McConnell’s hypocrisy on raising the debt ceiling. In 2019, after adding nearly $8 trillion in debt under President Trump, McConnell was adamantly against the United States defaulting on debt. But now that there’s a Democratic president, he’s using the debt limit as a political football—risking the livelihoods of millions of Americans and threatening to throw our recovering economy into a tailspin.”

Peter Navarro said McConnell has “never been a supporter of Trump.”

Steve Bannon says McConnell “does not want any MAGA Senators.”

Steve Bannon said McConnell told Trump “I don’t want to hear any more of this drain the swamp talk.”

Considers Joe Biden to be a “personal friend”

Congresswoman Marjorie Taylor Greene has the following to say about McConnell:

Called Liz Cheney  “leader with deep convictions and the courage to act on them.”

Trump called him the most “overrated man in politics”

Trump said the GOP would “never be respected or strong” with McConnell at the helm.

Failed to deliver for Donald Trump on Obamacare repeal, in spite of having 7 years to prepare for the legislative moment

Lou Dobbs said Congress was on track to be the “most unproductive in 165 years, an honor in their own making” – with Mitch McConnell at the helm in 2017

Mitch McConnell and James Chao traveled to China as guests of the China State Shipbuilding Corporation (CSSC) and met with former Chinese President Jiang Zemin, a former classmate of Chao’s.

Urged GOP Senators to not object to electoral college votes.

Schweizer highlighted Transportation Secretary Elaine Chao, who is married to McConnell, as illustrative of what he described as widespread political conflicts of interest between sitting American officials and foreign governments.

“The Chao family are deeply embedded commercially and financially with the Chinese government,” explained Schweizer. “The Chinese government essentially set them up in the shipping business. Their ships — these are large cargo ships that transport a large amount of goods around the Pacific.”

Has a personal wealth of over $27 million