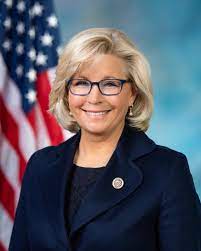 “With an approval rating at 19% in Wyoming, people are wise to Liz Cheney. She is a threat to Free and Fair elections, which are the cornerstone of our Country, because she caved so easily on the Crime of the Century. She is happy to join the Democrats in the Unselect Committee (the next RUSSIA, RUSSIA, RUSSIA Hoax), and spread more of their lies.
Cheney is far more unpopular than her father, who just lost his position as the least popular Vice President in American history to Kamala Harris. Democrats would never put up with a Liz Cheney in their ranks. If we had a Free and Fair media, instead of a corrupt media, those election results would never have been allowed to happen. The proof of irregularities and fraud is massive!”
-Donald Trump
Source:  https://gab.com/realdonaldtrump/posts/107254721807167976

Praised by socialist Andrew Yang for “standing up for her principles.”

Agreed to serve on the committee to investigate January 6 event

Her fundraiser stopped working with her

“Miller’s messaging has already prompted one of Cheney’s fundraising firms, the Morning Group, to disassociate from her. The congresswoman had originally hired the Morning Group for help with raising a war chest against the onslaught of potential challengers and specifically one endorsed by former President Donald Trump. A source told the Times that the group informed her last month that it will be cutting ties.”

“Cheney, who was booted from her House Republican leadership position in May, could potentially cause problems for McCarthy in the future if she is reelected and the Republicans are in the majority. Cheney, who has been a source of controversy since breaking with her party to vote to impeach Trump, could continue to be a problem for McCarthy if he gains the speakership.”

“There’s another component of the Wyoming election that must also be considered. Cheney, like her father, is a Neocon. There has been a quiet but notable rise in neoconservative leanings on Capitol Hill in recent years following the fading status of the Tea Party and confusion surrounding the tenets of America First populism. The Afghanistan debacle didn’t help the issue as opposition to Joe Biden prompted many Republicans to question why we left the quagmire the way we did.”

Many voters upset with her abandonment of Donald Trump

“She’s a puppet,” he practically spits. “Hell, she wants to be president.” – Paul Lanchbury

Says she wants to “protect democracy from Trumpism”

“Cheney has insisted that her sole focus is serving the people of Wyoming and protecting the democracy from Trumpism, not angling to ascend to the White House as potentially the moral leader of a post-Trump GOP.”

Host of “Cowboy State Politics” calls Cheney “by far the most liberal representative we have right now.

“If Liz Cheney wins this race, that’s going to send a signal to the left that they’ve pretty much flipped Wyoming, because Liz Cheney is by far the most liberal representative that we could possibly have right now. … If you can do it in Wyoming, you can do it across the country, no matter what the electoral makeup of that state happens to be.”

“It’s complicated, but in the first place, Iverson said, by voting to impeach Trump, she was not “defending the Constitution.” Her action was constitutionally suspect because she voted before there was any time for hearings or investigations, he said, denying Trump “due process.”

Called by Kevin McCarthy as a “Pelosi Republican”

“Meanwhile, McCarthy supported an effort by Republicans to remove her from House leadership and he called her a ‘Pelosi Republican’ after she accepted the speaker’s offer to sit on the January 6th investigative panel.”

Described by Trump as “the most quoted Republican in the history of our country by Democrats.”

“And as bad, her image as a conservative like her father, former Vice President Dick Cheney, has also been hurt. In the McLaughlin & Associates survey, 53% described her as liberal, and only 26% labeled her conservative.”

Said she was “wrong” in opposing gay marriage in the past; has a sister who is a lesbian

“Liz Cheney: Those who think that by ignoring Trump, he will go away, have been proven wrong. And in my view, the American people, they deserve better than having to choose between what I think are the really disastrous policies of Joe Biden– in a whole range of areas, really bad for our economy. From a national security perspective, what’s happened, what he’s done in Afghanistan: very dangerous policies for the country. But the alternative cannot be a man who doesn’t believe in the rule of law, and who violated his oath of office.”

Is 3 times more popular with Democrats than conservatives

“Meanwhile, polling has shown that the daughter of former Vice President Dick Cheney is deeply unpopular with Republican voters, only 15% of whom viewed her favorably in a May survey. She is three times more popular with Democrats, according to the poll.”

Said there was no widespread election fraud to overturn the election; said Dominion machines were not corrupted by a foreign power.

“You all know that there is no evidence of widespread election fraud sufficient to overturn the election. You all know that the Dominion voting machines were not corrupted by a foreign power. You know these claims are false. Yet former President Trump repeats them almost daily.”

Says the GOP cannot “take back the House, Senate and White House if we are embracing the Big lie.” – 1:05

Says that Trump is at war with the Constitution for not cooperating with the decisions of the courts.

Says Stefanik is “complicit in the Big Lie.”

Says Mike Pence was a “hero” for what he did on January 6.

“I will not support him,” said Cheney. “And we’ll do everything I can to make sure that doesn’t happen.”

Called one of her Republican colleagues a “neo-Marxist.”

“And she got downright petty with Rep. Jim Banks, chair of the House Republican Study Committee, calling him a “neo-Marxist.”

This is a Republican leader.  And she’s calling one of her members, over a point of disagreement, a “neo-Marxist” as if he were some Democratic campaign opponent?  Things like this get people’s attention.  Her job requires diplomacy, tact, and maybe nudging if someone is wrong, and above all, supporting the members.  She seems to think her leadership position of her conference committee means she should get rid of Republicans and turn the GOP into some other party.  Maybe she’d be happier as a Democrat, though I imagine she’d be mean there, too.”

“I do not believe he (Trump) should be the leader of the party.  Called Trump “unfit for office.”

Called Georgia Secretary of State “a tremendous example of local strength of Republican officials around the country.”

Says “those who refuse to accept the rulings of the courts are at war with the Constitution.”

Says Trump launched a “crusade to undermine our democracy.”

Said Trump “put his own interests ahead of the Constitution”

Said Donald Trump “should not be part of our party or national politics going forward.”

Said “what Donald Trump did was the biggest violation of an oath of office of any President in US history.”

”No one should question Gen. Milley’s loyalty to our country, commitment to the Constitution or to the civilian chain of command.

We all should thank him for standing in the breach and following his duty during a time of peril for our nation.”

“This is not the kind of thing a person says if they are beholden to principle and are seeking to hold powerful people to account. The entire point of congressional oversight is to question the actions of appointed individuals who otherwise are not directly accountable to voters.

But perhaps Cheney could justify her comments if Milley truly were above reproach. Yet, the facts say that he clearly isn’t. This is a man who has pushed woke ideology on the military and whose rank incompetence helped lead to the deaths of 13 Americans in Afghanistan last month. Even putting aside the phone call with China, which we’ll get to in a second, Milley is not worthy of praise. He’s worthy of scorn and pushes for resignation.

Despite that, here’s Cheney attacking her own Republican colleagues for daring to try to hold Milley to any semblance of a standard as a military leader and administration official. Further, Cheney is lying when she tries to brush off Milley’s treasonous call with China as him “following his duty” in a “time of peril.” What she’s doing there is attempting to brush it off as a product of January 6th, except the call in question, where Milley gave aid and comfort to China without proper authority occurred, in October of 2020.”

Club for Growth says she is a “Clinton Republican”