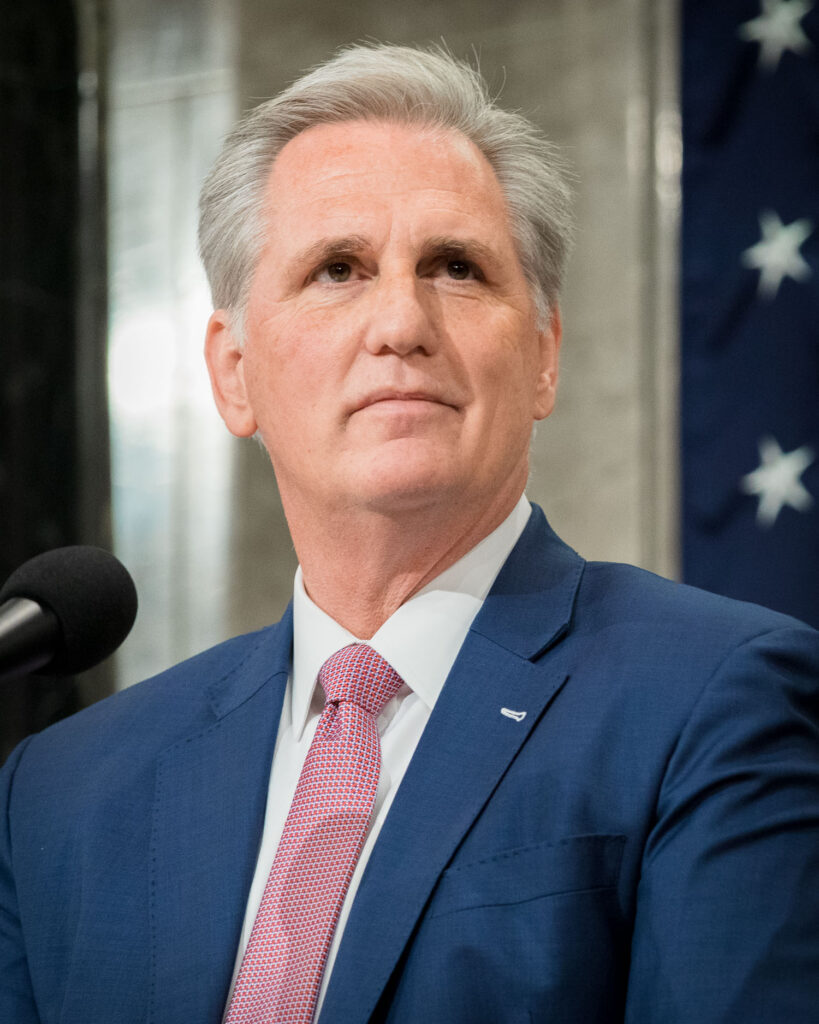 “”I don’t think anybody is questioning the legitimacy of the presidential election. That’s all over with. We are sitting here with the president today.”

Formed a PAC which gave money to members of Congress who voted to impeach Trump:  Peter Meijer and Fred Upton.  He gave about $100,000 to each lawmaker.

Paid $1,500 to be Frank Luntz’s roommate and live in his apartment (who works for Google)

“Also, he “struggled to win the support of conservative members, some of whom were reluctant to support him amid concerns that he would not represent enough of a change from the tactics of former speaker John Boehner.”

Rumor he had an affair with former Congresswoman Renee Ellmers

“GOP Representative Walter Jones added more fuel to the fire when he issued a letter calling on candidates to withdraw from the race for speaker if “there are any misdeeds he has committed since joining Congress that will embarrass himself, the Republican Conference and the House of Representatives if they become public.” Jones later confirmed that his letter was partly inspired by a blog post he read about McCarthy and Ellmers.

McCarthy changed his mind on pursuing the speakership within a matter of hours, making the case for his candidacy at an early morning meeting, then saying he was dropping out by noon. Steven Baer, a conservative activist known for flooding lawmakers’ inboxes, had been emailing many top Republicans about the affair rumor, and according to the HuffPost, he sent an email that morning with the subject line, “Kevin, why not resign like Bob Livingston?” Representative Bob Livingston quickly withdrew his bid to be speaker and resigned in 1998 after acknowledging an affair.”

“ a crew of lobbyists, political consultants, and big-money donors seemingly masqueraded as grassroots tea-party populists in a bid to bolster McCarthy’s credibility with Trump supporters. The point of this scheme was to help McCarthy defeat a far-right challenger in an important intra-party election, elevating him to become the House GOP leader and ensuring that a corporate ally remained at the head of the party. For all of Trump’s bluster about draining the swamp, the dark-money campaign to elevate McCarthy shows how the GOP’s corporate enablers not only endured but also adapted their tactics to be murkier than ever — all while ensuring that the future of the Republican Party remained in friendly hands.”

“Yet the right wing of the party viewed McCarthy with skepticism, a Brooks Brothers-wearing RINO cut from the same cloth as outgoing Speaker Ryan. Conservative media outlets blasted him as soft on the “border invasion” because he didn’t include border-­wall funds in must-pass legislation, which would have given the money a better chance of getting approved by Congress. Now, as he eyed Ryan’s old job, he was introducing “meaningless” border bills that stood no chance of passage to prove his conservative cred.”

About the dark money propping McCarthy up:

“The grassrootsy-named State Tea Party Express ran a bunch of ads to salvage Kevin McCarthy’s standing with the MAGA faithful just before McCarthy ran to become the new House GOP leader. Despite the name and branding, that tea-party group got most of its money from a D.C. outfit run by a veteran corporate lobbyist with extensive ties to massive power-utility companies and a taste for fine wine. And one of those firms just paid nearly a quarter­billion dollars related to an alleged racketeering and bribery scheme using the same kind of dark-money groups that were used to boost McCarthy.”

Republican aide said Trump expressed displeasure with McCarthy when working with him.

“In private calls with lawmakers, Trump had expressed similar displeasure with McCarthy, too, according to one of the Republicans.

“It’s not like the ‘My Kevin’ days,” the Republican aide said.

Warned about division within the GOP

“McCarthy, who declined to respond to an interview request, has said he wants House Republicans to focus their attention against Democrats, not on internal party rifts.”

“I believe Kevin McCarthy is one of the reasons the election was stolen from President Trump.”

Has close ties with pollster Frank Luntz, who is conducting a lot of research on vaccine hesitancy among conservatives

Stew Peters Show criticized Kevin McCarthy for supporting Republicans “no matter how badly they failed their party or failed their constituents.”

“The only thing Kevin McCarthy cares about is winning as many elections as possible for the sole purpose of becoming Speaker of the House.”

“His majority would be made up of Republicans who don’t believe in an America First Agenda.”

“In 2016 – he told other Republicans that he thought Donald Trump was on Putin’s payroll.”

“McCarthy always wants to have it both ways.”

“Supported withdrawal from Afghanistan while Trump was in office.”

“Could not protect a reputation as a strong leader within his own conference.”

“Is now working for 5 of Liz Cheney’s favorite House reps against Trump.”

“Could not find enough votes to pass a budget to ensure taxpayers do not fund Planned Parenthood.”

“His job is to keep the Republican Party as controlled opposition”

“Why hasn’t Kevin McCarthy spoken out about the vaccine mandates?”

“He will destroy what is left of the Republican Party”

Referred to Joe Biden as the “President of the United States”

Has a very low approval rating

Peter Navarro:  “Kevin McCarthy has got to go.”

“Despite Trump’s rages, McCarthy has continued to fund Trump critics in his party, following financial agreements signed with them before Jan. 6, based on a formula that determined how vulnerable incumbents could be in 2022.

Through a committee called Take Back the House, which has been used in other recent election cycles, McCarthy has been channeling money to the reelection campaigns of eight of the 17 Republicans who signed on to either impeach or censure Trump for actions that led to the Jan. 6 attacks.”

“The group has also sent checks to nine other Republicans who voted to support the bipartisan commission to investigate the attacks. Trump warned of “consequences” for that “wayward” and “weak” group. Some of Trump’s fiercest defenders, including Cawthorn and Rep. Lauren Boebert (R-Colo.), have also benefited from joint fundraising agreements.”

Accused by Democrats of using “violent rhetoric” against a woman

“At the Nashville dinner, his learning curve was still on display. Presented onstage with an oversized gavel, meant as a symbol of his coming coronation, McCarthy said it would be “hard not to hit” House Speaker Nancy Pelosi (D-Calif.) if she were to hand it to him after Republicans win control of Congress.

It was a joke he had made before, in private settings with donors, according to multiple people who had heard him. But under a national glare, Pelosi’s allies pounced, accusing McCarthy of using violent rhetoric against a woman.”

““He is not a leader,” former Trump adviser Stephen K. Bannon said in June of McCarthy on his daily podcast, which has become an anti-establishment rallying point for Trump devotees. “He is the pledge chairman at the fraternity. He is drinking what the client’s drinking.”

““The relationship remains hot and cold. The former president has leaked word about McCarthy’s visits to Trump’s homes in Bedminster, N.J., or Mar-a-Lago, Fla., to drive public interest, while also privately bad-mouthing McCarthy to advisers and entertaining the possibility that someone else might make a better speaker, according to the former president’s aides.”

“Aides say Trump has learned to be wary of McCarthy’s different interests, even as they continue to work together. Trump, these aides say, has still not forgiven McCarthy for his proposed censure for the Capitol riot.”